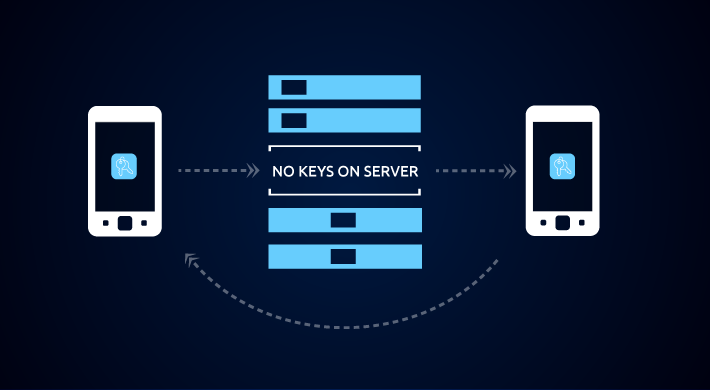 When it comes to protecting our users’ privacy, Secure Group makes no compromises. All our communication solutions provide end-to-end encryption with keys that are generated on the users’ devices and stored only there.

Let’s start by stating our vision as a company again. We believe that everyone is entitled to their privacy and that this right is undeniable. When it comes to online communications, this right can be guaranteed and protected only via good cryptography. What we mean by “good” could be summed by the following commandments:

The first two points are the industry standard in our field. The contemporary encryption algorithms used by everyone, such as AES-256, are practically unbreakable. And if you are serious about security, you’d naturally prefer encryption that takes place on the sender’s device and is reverted only at the receiver’s end (E2EE – as opposed to in-transit encryption). But the third and fourth points are where different providers have different approaches – and it is, well, the key one.

Why managing keys yourself is the best option?

The whole idea of encryption is to make messages readable only to the intended recipients – and appear as nonsense to anyone else. To read the message, the recipient needs a decryption key. If that key somehow finds its way in the hands of a third party, this defeats the purpose of encrypting messages in the first place. This is why how you store them is so important.

Secure Group opts for not generating keys on our servers. Instead, it happens only on user devices – which is also the only place where they are stored. The same goes for all our communication applications:

Our servers only facilitate the communication between users. No copies of messages are kept on the servers – and even if they were, they’d be of no use to us. Every message that passes through them does so in encrypted form – as ciphertext. Since we don’t have the keys, we wouldn’t be able to read anything, even if we wanted to. In a way, the first thing we protect users from is ourselves. We believe this is necessary when you want people to trust you with their privacy.

Secure Chat and Secure Voice rely on encryption protocols that use ephemeral keys. There is no issue about how these keys are stored, as they disappear after each chat session or call. However, Secure Email – our proprietary PGP client available on Secure Phone, Secure BlackBerry, and as a standalone app for Android – uses long-term encryption keys.

When a new user launches the app for the first time, they are asked to generate a pair of public and private keys using a passphrase of their choosing. The entire key-generation process takes place on the device itself. The key pair is stored within the app, on the device. The user can also export it and move the file to another device or hard drive for safe keeping (it makes sense to do that because the keys are long-term). The keys never touch Secure Group’s servers.

When the user wants to send an encrypted email, they have to fill in the passphrase mentioned above to authenticate. Then the message gets encrypted using the receiver’s public key and sent to them. On the other side, the recipient opens the message and decrypt it with their private key – which only they have (created and stored on their device in the same way described above). This allows users to communicate in complete privacy, without having to worry about Secure Group’s servers getting compromised.